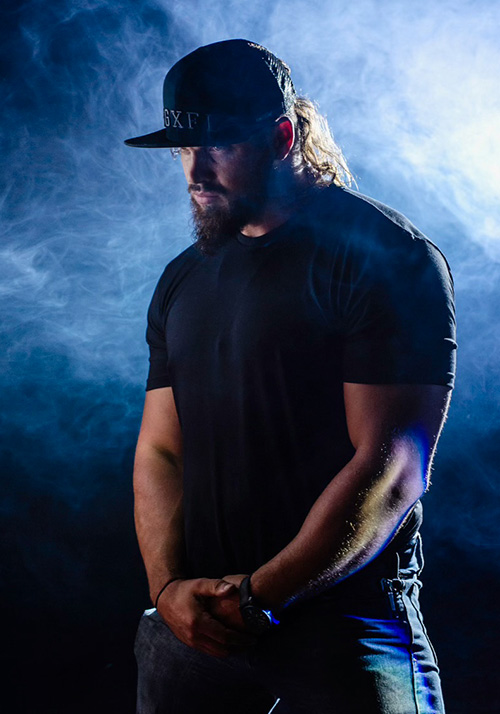 Bodybuilder, photographer, and clothing brand founder Rob Bailey started out trying to make high-energy workout tapes, but coupled with producer Charlie Hustle, he came up with a blend of rock, hardcore, hip-hop, rap, dubstep, and who-knows-what that made him an unlikely but viable left-field musical artist as the second decade of the 21st century rolled in. His story is one of him simply following his interests. His interest in art, design, photography, video, and graphics took him to art school for a time at the Art Institute of Philadelphia, but he left without graduating to take a job as a Web designer at QVC. When his wife, a then unknown Dana Linn Bailey, told him her dream was to be a professional bodybuilder and to own her own gym, he threw himself into advancing her career, using some of the marketing skills he picked up while working for QVC. Bailey invested $400 in T-shirts and screen-printed them in his garage, thus starting a successful fashion brand, Flag Nor Fail. Relentlessly creative, Bailey next set out to make mixtapes of tracks he liked to work out to, refining things until, along with producer Hustle, he created a mash-up of various beat styles, from hard rock to rap and club rhythms, and with a rough, powerful vocal style laid over the top, he found himself becoming a successful independent musical artist with a built in niche audience and enough accessibility to build on it. An EP from Bailey and the Hustle Standard, Battle Tested, appeared in 2012, with an eight-track mini-album, Beast, following in 2013.