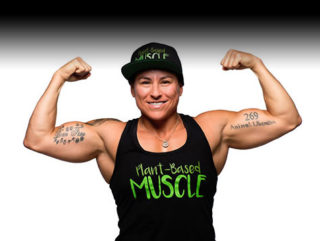 Vanessa was born and raised in Denver, Colorado. She adopted a plant-based lifestyle in 2003, at age 22. Today she owns a personal training business, specializing in strength and conditioning, boxing, and basketball skills. As one of the top 10 point guards in the U.S. coming out of high school, Vanessa was awarded a full basketball scholarship to Colorado State University. She was drafted to play professionally in the WNBA. Due to her father’s passing during that time, Vanessa declined the offer to play in the WNBA and took up boxing, honoring her father who was a professional boxer. Vanessa became a 3-time Colorado Golden Glove state boxing champion.

Along with Vanessa’s in-home personal training business, she offers personalized nutrition and training programs on www.plantbasedmuscles.com. She is a regular contributor to Vegan Health & Fitness Magazine, is the co-author of the 2017 new release, Plant-Based Muscle, has been vegan for over 16 years, and aims to inspire others, showing that you don’t need to harm animals to have a muscular physique.