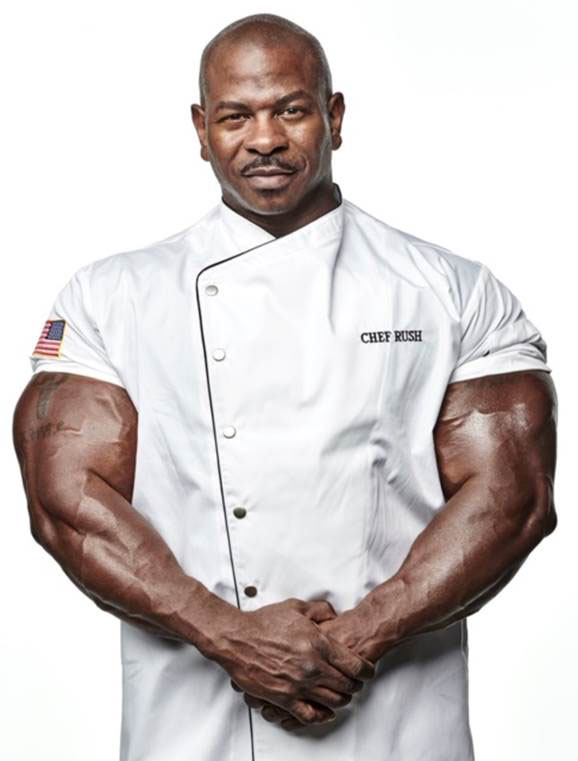 Chef Andre Rush is renown as one of the top chefs in the United States military, and retired as Master Sergeant. He has represented the Army resulting in over 100 new soldiers joining the forces. He was also a member of the United States Culinary Arts Team where he competed and won 150 medals and trophies.
He is regarded as the Army’s strongest chef by lifting over 700 lbs as well as being a master ice carver.
Chef Andre Rush was the Senior Enlisted Aide to the Superintendent of the United States Military Academy. In this capacity he served as Senior Aide and advisor for DVQ’s, dignitaries and high profile VIPs.

He joined the military as a reservist where he would later switch over to active Army in July of 1993. He has spent time at Fort Stewart, 503 Infantry at Camp Casey Korea, Fort Campbell Kentucky and Fort Bragg North Carolina.
In September 1996 he served as the Joint and Vice Chief of Staff for eight general officers and four Chief of Staff of the Army over the next three years. Moving to West Point soon after, Chef Rush had the opportunity to work for four Superintendents as well as ASI Finance CMD GO Washington DC. He has also worked in the White House and the Presidential Guest House.
​
Chef Rush has deployed multiple times and has held a variety of leadership positions to include Senior Advisor, Enlisted Aides, Operational Manager, and Foodservice Manager.
​
He has served as a hand-to-hand combat trainer to over 1,000 cadets, airmen, soldiers, marines and civilians. He trained over 10,000 troops in the art of culinary and was called upon Army wide to assist in teaching other senior and junior aides. He has volunteered his entire career and rendered his services for the Core of cadets for the last 10 years.